Home Around the Home Architecture You’d Never Know From The Outside, But This Modest Home Rivals The...

When you look at this £93-per-week rented home in Brighton, East Sussex, you might not be that impressed. I mean, what could someone possibly do with such a drab looking home? Well, get ready to have your mind blown by a 67 year old grandfather of three, former decorator, and self-made artist, Robert Burns!

This Brighton resident decided to paint his own renditions of famous works of art, using celebrities character models, such as Russell Brand as Jesus, Wayne Rooney as Francis of Assisi, and Jose Mourinho as Leonardo da Vinci’s Salvator Mundi. However, that doesn’t come close to covering just how awesome his artwork is.

Don’t let the deceptive exterior fool you. This home holds a little over 10 years of creative prowess within its bland shell. 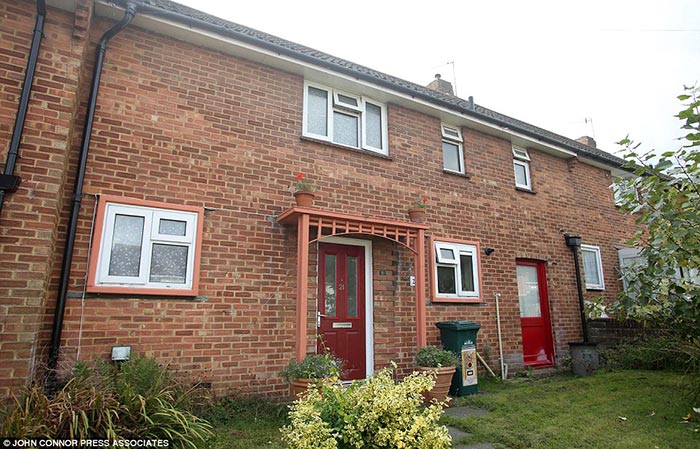 Though he has never set foot in Italy, a $3 book on the Renaissance Period was enough to convince Robert that his home needed to reflect the beauty of that time period. However, doing the paintings wasn’t enough. 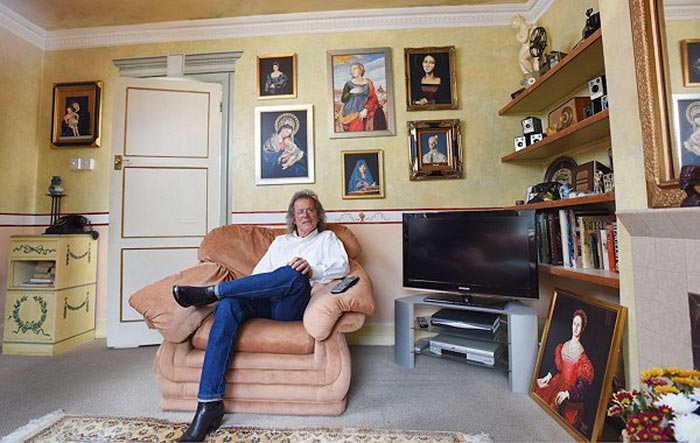 So, he just decided to paint his home up like the Sistine Chapel. You know… just because. 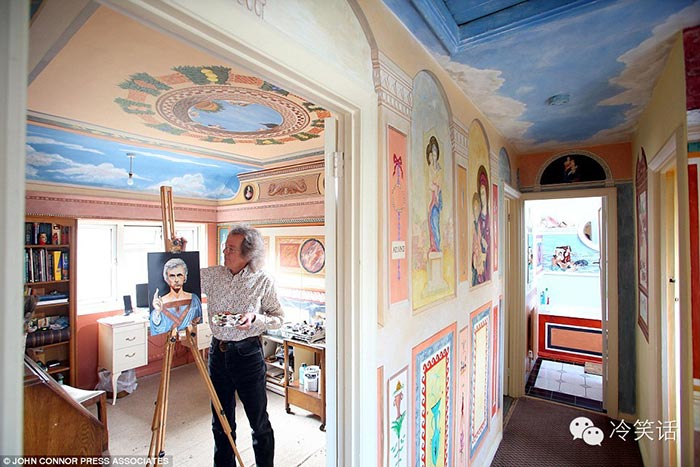 It’s only taken him a little over a decade, twice as long as Michaelangelo. I guess it helps when you don’t have the Papacy breathing down your neck to get it done. 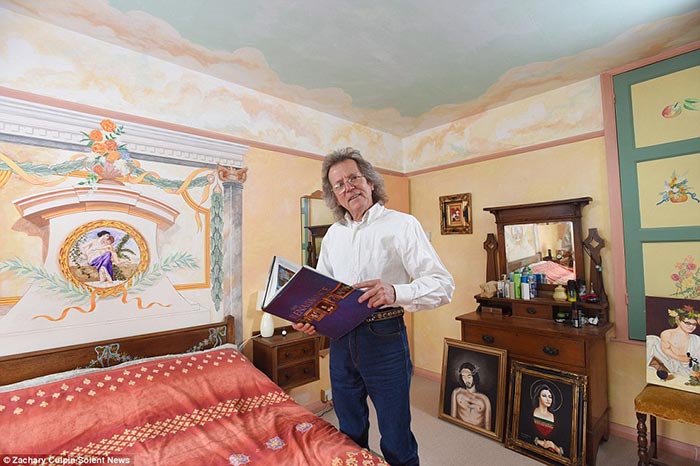 Burns told The Mirror, “I have finally completed the job I set out to do, but it’s really been a labour of love. I’ve enjoyed every step.” 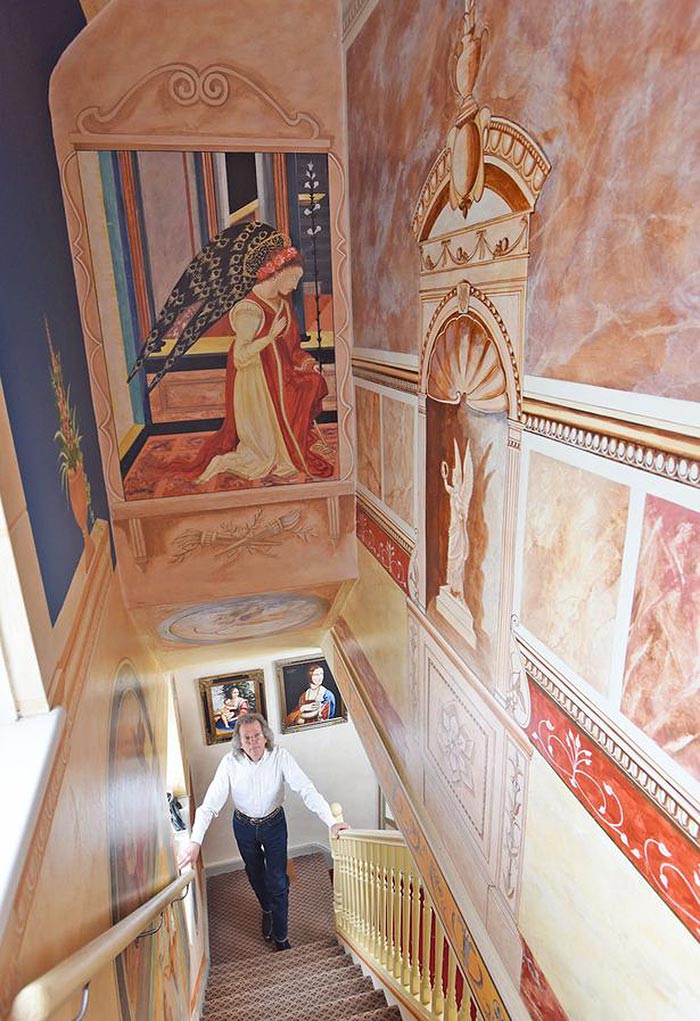 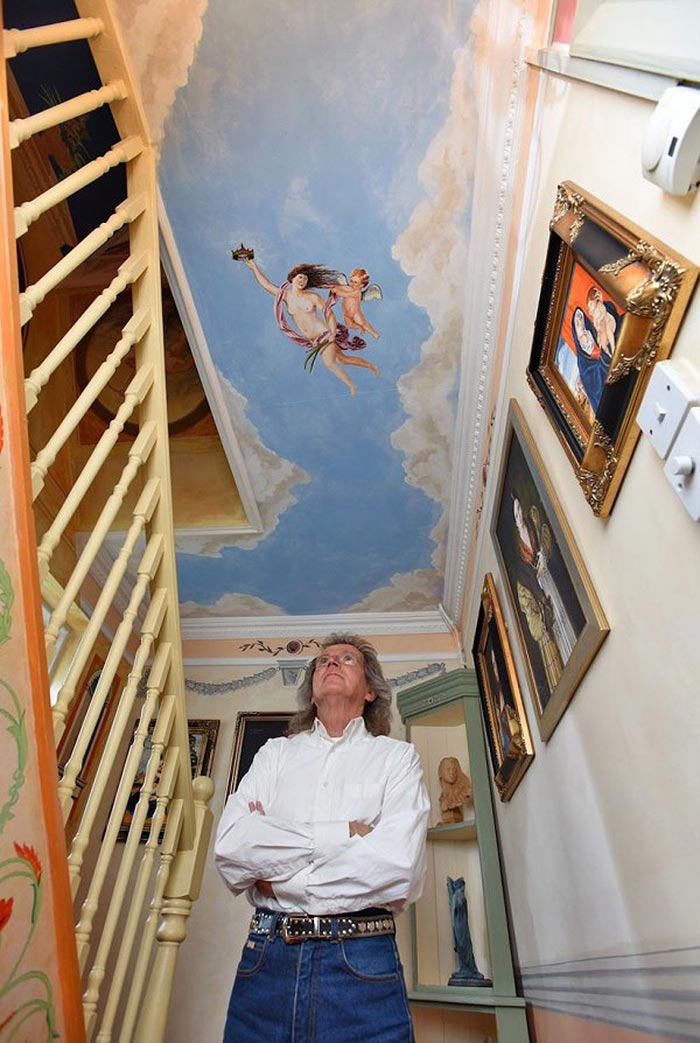 Seriously though, the kind of passion it takes to create an entire home of revised 16th century art is not taken lightly. 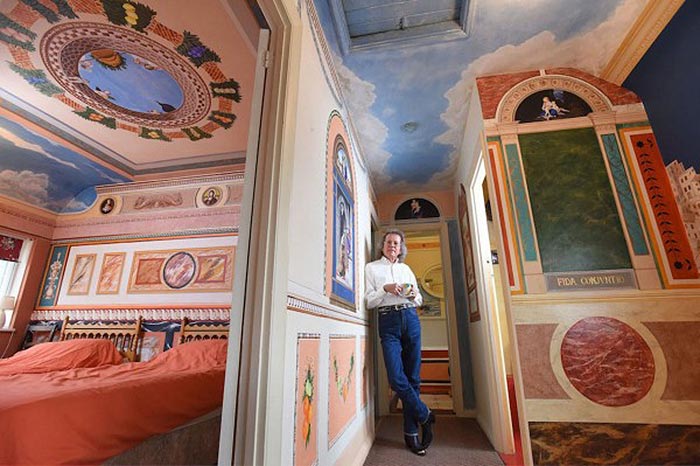 Burns says he blames his wife for a great deal of that passion. 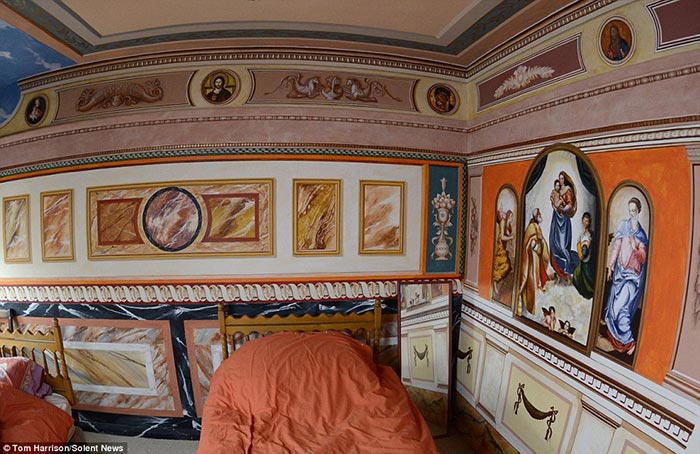 “I asked my wife Linda if she thought it looked like a dog’s breakfast,” Robert said of his first painting attempts. “She said she thought it was excellent, so I blamed her for me continuing.” 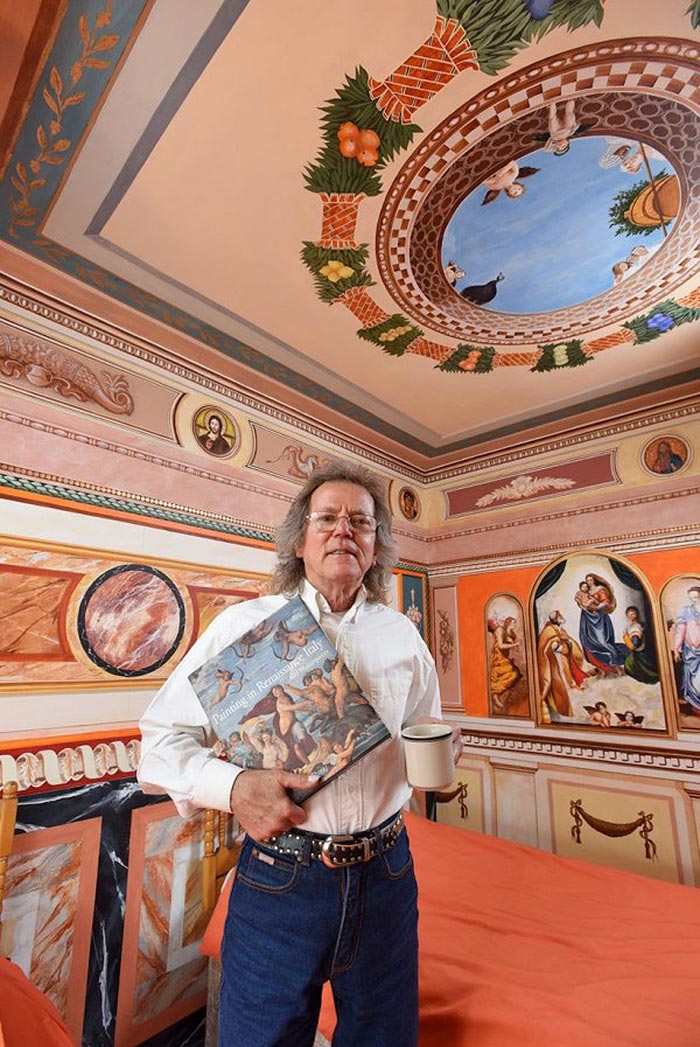 I’m guessing she wasn’t displeased with that decision. I mean, how many ladies would love to have a bathing area like this?! 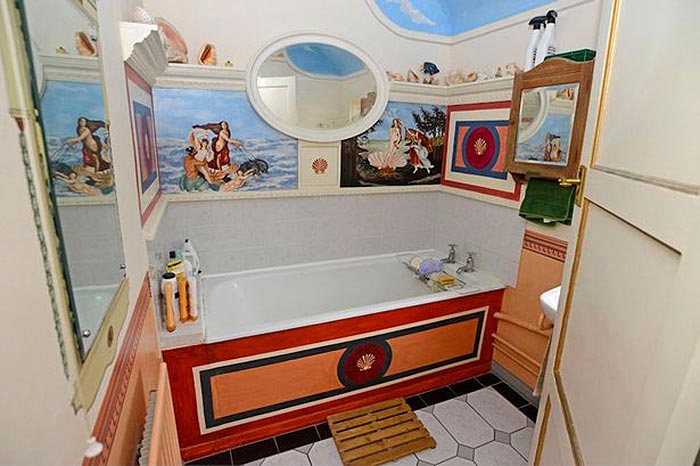 To add to her brag factor, a local millionaire has commissioned Robert to paint the ceiling of his ballroom. 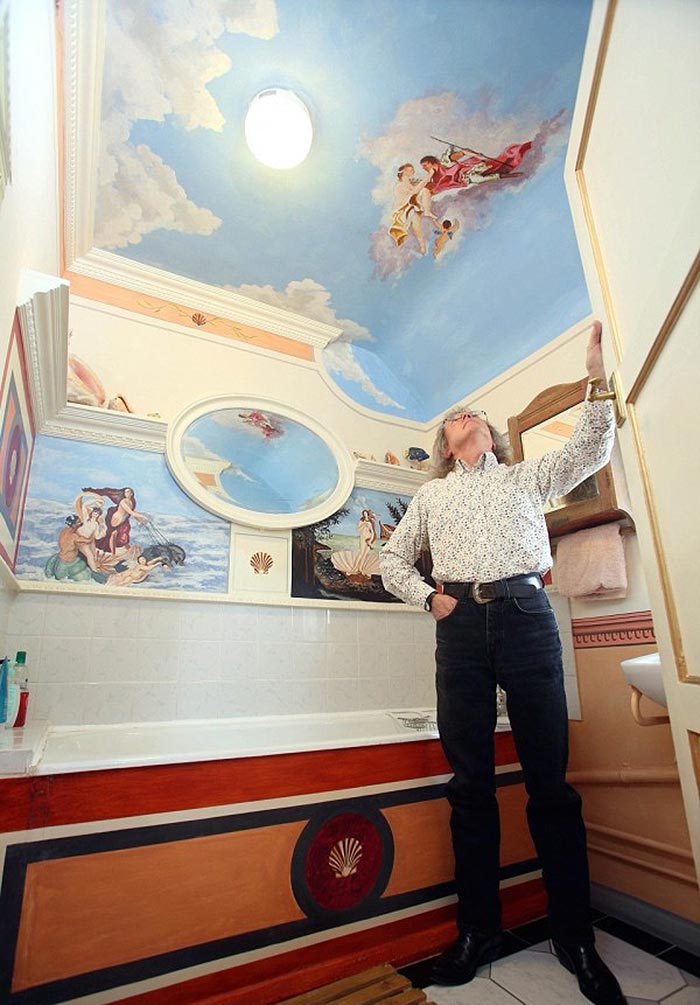 Robert knows the only drawback is that he can’t take the room art with him if he should leave. Can’t say I see that happening anytime soon… 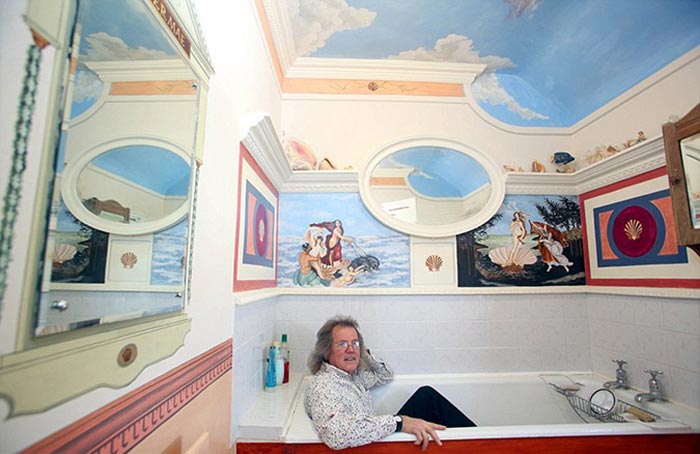 As much as Robert has done, he doubts his work is finished as he explained, “The spare room is still waiting to be painted. That will be the next project.” 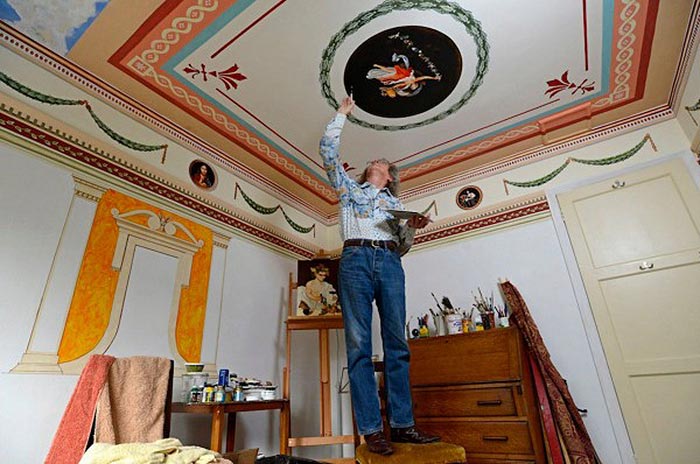 He claims that his children and grandchildren have grown so accustomed to it, that they hardly notice the art anymore. 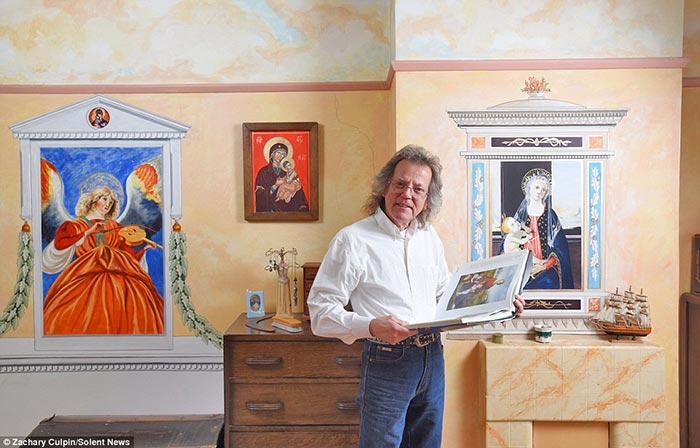 Perhaps if they really understood what an accomplishment it is to do this based on learning from a book, it would be more awe inspiring again. 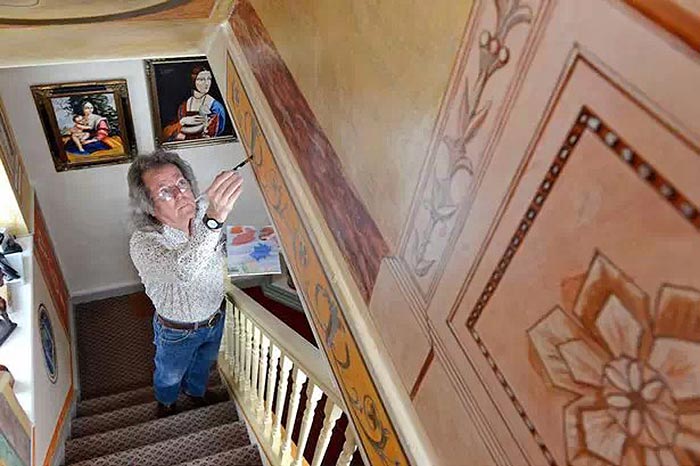 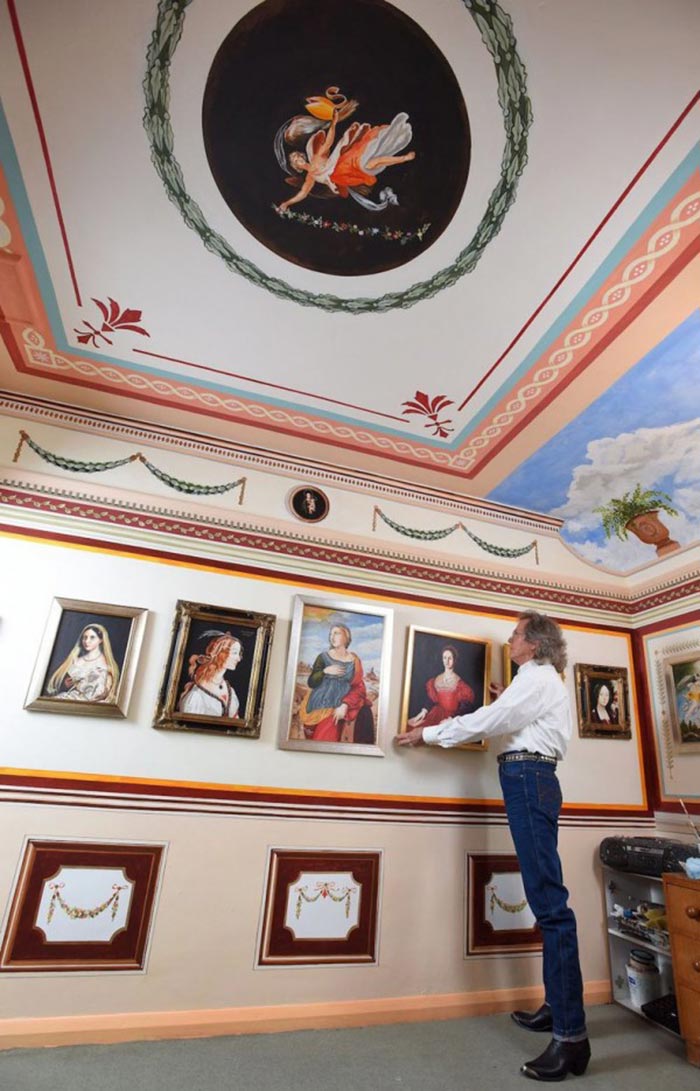 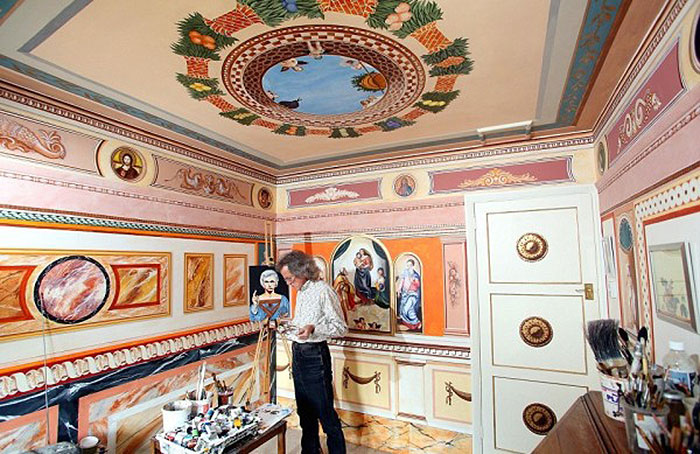 Here is a painting of Wayne Rooney in the style of Francis of Assisi by Francisco de Zurbaran after seeing him in prayer. Robert has dubbed the painting, “The Ultimate Hoodie.” 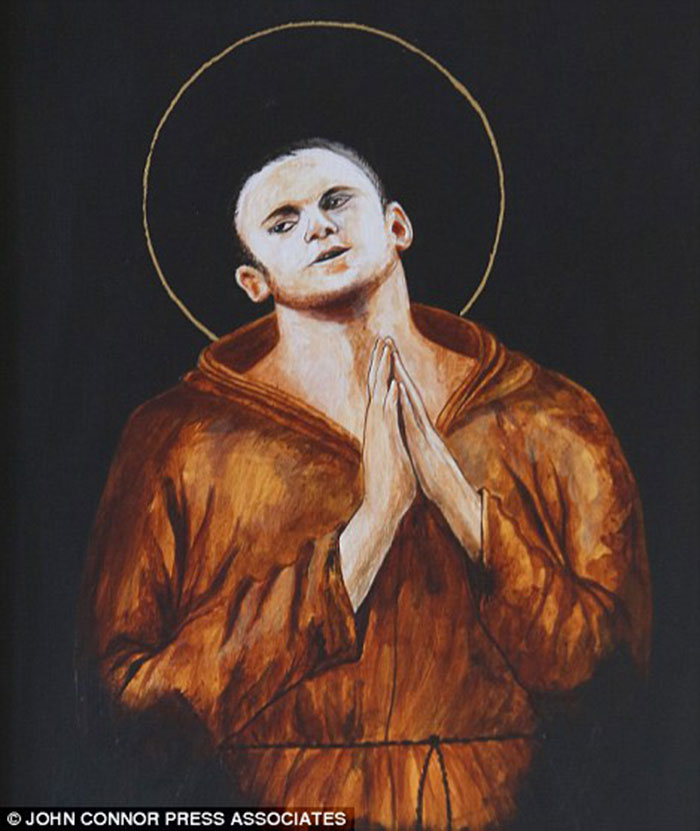 One has to wonder how many more celebrities will end up being immortalized, Renaissance style, before Robert has finished. 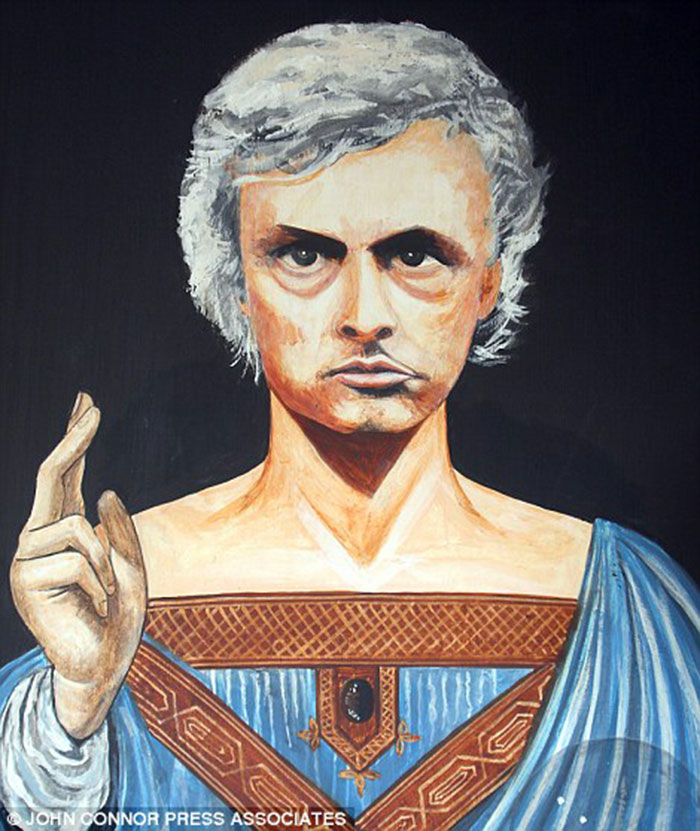 If this guy isn’t a reincarnation of Michelangelo, then Mike must at least be looking down with pride. 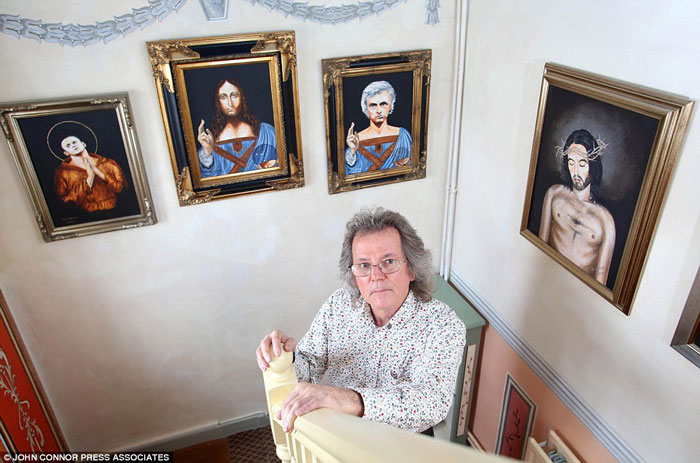 Dollhouse Doors For Your Wall Outlets? Yes, They’re A Thing

10 Grassless Yards So Gorgeous, You’ll Reconsider Having A Lawn

© Copyright 2020 - Lighter Side of Real Estate
Do NOT follow this link or you will be banned from the site!
1.4kshares