Fair Warning: This story isn’t exactly short. BUT… if you stick with me til the end, AND you’re a real estate agent, you’ll receive a nice payoff.
– Mike Bell, “Chief Chuckler in Charge”

I crouched over my tattered, brown couch as I searched the cracks for loose change. I was hungry and needed to eat, and so did my dog, Cubby. I was 39 years old and in the “prime” of my life.

It was 2013, around March or April as best I can recall. I was down to $13 in the bank, plus almost two bucks in change I scored from my couch.

The plan? Go down to the Food Lion (local grocery) and walk out with as many cans of tuna as $15 could buy. Which is exactly what I did.

Cubby and I were set for the next few days.

(Btw, I’ll never forget the shame of having to combine two forms of payment—a debit card and a fistful of change—for a $15 transaction.)

Such was my life back then. Some people live paycheck to paycheck. I was living meal to meal. I was broke and deflated, but not yet defeated.

Let me stop you here.

This isn’t some bullshit “rags to riches” story. Nor am I seeking your sympathy. Rather, this is the true story of a “perfect storm” which led me to create the Lighter Side of Real Estate brand. I simply believe in giving full context when telling a story.

Now, based on what I’ve told you, you might assume I was a crackhead or something. And I wouldn’t blame you. I was practically living on my couch—it doubled as both my bed and “office.”

I wasn’t a crackhead at all, though. Drugs were never my deal. See, I was actually a different kind of crackhead. Instead of searching for my next high, I was searching for that elusive lil’ booger called “happiness within.”

Little did I realize, happiness comes from making others happy. Give value to others, and it will boomerang back to you. Looking back, I hadn’t doled out much value at that point in my life.

Life was pretty gloomy then.

Most people have built a nice life for themselves by their late 30’s. But me? I was a grown-ass man who could barely feed himself, let alone provide value to anybody.

My biggest fear, which has always been “wasted talent”, was becoming more of a reality. I hadn’t found my calling in life yet, and it was eating me to the core—financially and emotionally.

I knew I was a bright person, but I still hadn’t figured out exactly what my talent was. Or how I could use it to give value to others.

Ultimately I found it, which you’ll learn in a minute. But before I tell you, I want you to know how I’d fallen so low (and how I got back up).

I cut my teeth on real estate fresh out of college in 1997 when a buddy introduced me to the world of appraising. He was a successful mortgage broker, and I was a floundering graduate trying to figure things out. He introduced me to his appraiser friend who agreed to take me on as an apprentice.

Early into my appraisal career I began investing in real estate, so getting my sales license seemed only natural. In 2004 I became licensed to sell. I sold and appraised until I put both licenses on inactive status in 2008. They’re probably caked with dust by now.

I’d like to say that leaving real estate was by choice… that I was some “rock star” agent who just “wanted more of a challenge” or some nonsense. But I won’t. I’m more transparent than that.

When the real estate bubble popped, I hadn’t built up enough of a client base to survive. Stepping away from my appraisal career, on the other hand, was completely voluntary. Newly-imposed regulations on appraisers had strangled my love for the profession.

…which led to that disgusting brown couch—pretty much my sole possession at the time. 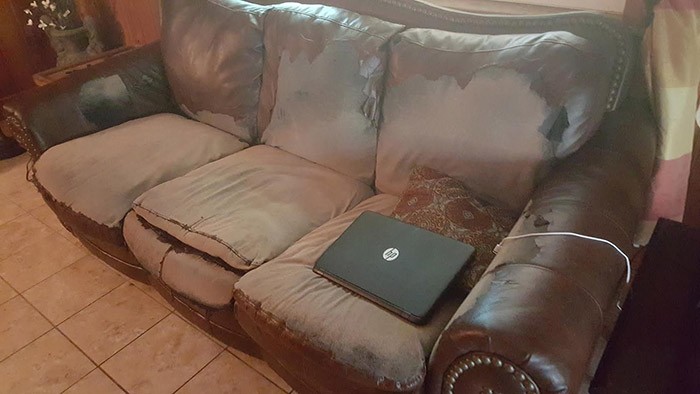 Literally the spot where the Lighter Side of Real Estate was conceived.

So I turned to social media.

I figured I’d build a brand by putting out content on Facebook, then figure out the money part later. Maybe create witty t-shirts and sell them to agents or something.

It was at that moment I hedged my bets and went all in. I mean, what did I have to lose? My couch was already PAID FOR, baby!

I named my first Facebook page, Real Estate News & Trends. I shared the same real estate stuff everyone else was sharing (yawn). They were the type of posts everyone scrolled right past. This was mid-2013.

In hindsight I realize how naive I was. I mean, it was interesting content to people like me and you (real estate folks)…

It was data.
It was boring.
It was… oatmeal (not bacon).

I was clueless about how to build a likable brand online.
I was irrelevant to the few followers I actually had.
I was wasting time making “noise” on social media that lacked any value.

Because let’s face it, real estate isn’t exactly the sexiest thing to talk about on social media.

But I wanted so badly to build an unforgettable brand.
To reach lots of people.
To have influence.

Sound familiar? I wanted everything from social media that you probably want as an agent. But I failed.

I failed because I was building a brand without a soul.

I was just posting more of the same ol’ crap with a fancy logo slapped on it. My “brand” was lost in a sea of sameness.

No likes.*
No comments.
No shares.

This went on for months. How the heck was I gonna build a popular brand if I couldn’t even reach anybody… or post anything interesting? And then one day it hit me harder than a lowball appraisal…

Call it luck, fate, or even divine intervention if you want. I remember it vividly. The date was December 29, 2013.

After moping around all weekend, wondering if I should throw in the towel, I stumbled onto a podcast that changed everything for me.

With one simple word, this random podcast dude shifted my entire mindset.

I FINALLY knew what I had to do.

The fusion of information and entertainment. Brilliant!

Truth is, we humans crave entertainment. It’s hard-wired into us all!

And if you can find a way to post real estate related stuff that’s actually interesting (and not desperate-sounding or boring), you’ll grab people’s attention…

… and they’ll like you. And more importantly, remember you!

And if there’s one thing I’ve learned, it’s this…

Attracting clients has less to do with your “credentials”… and everything to do with how people feel about you!

So after hearing this podcast, I scrapped my old Facebook page and started a new page called the Lighter Side of Real Estate…

… with a fresh new strategy.

I began posting about topics on the fringes of real estate. In other words, NOT listings or boring real estate news. Instead, I posted fun content that had broad appeal (but always with a real estate angle woven in).

I started showing the plight of agents through lighthearted humor. In doing so, I demonstrated that real estate people are fun and interesting, not self-promoting robots like much of the public thinks.

Basically, I tried (and still try) to give real estate the makeover I feel it needs.

And boy did it take off!

My content was finally getting shared by agents AS WELL AS regular, non real estate folks (i.e. potential buyers & sellers)!

And wouldn’t you know it…

In no time at all, my posts were getting more attention than the “top dogs” of real estate!

Yep. Me. A “nobody” with zero industry connections—and my engagement stats were blowing right past theirs. 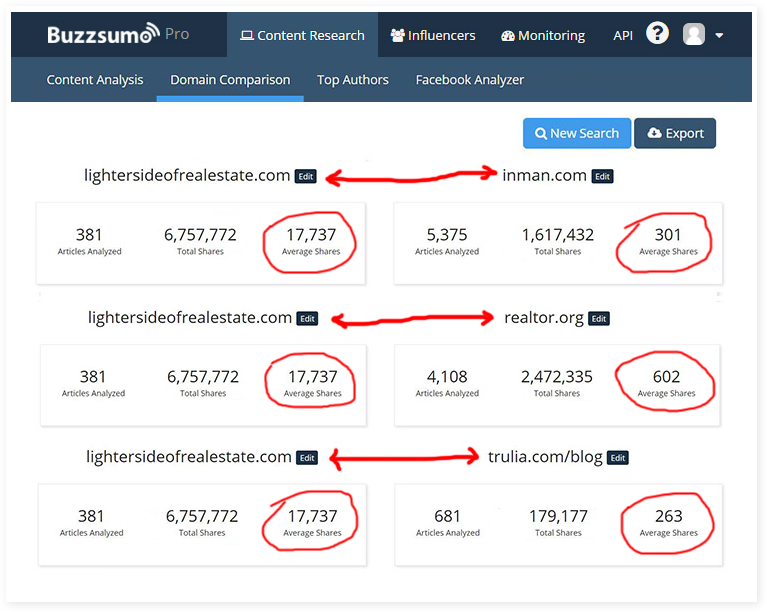 Heck, at one point, Lighter Side’s articles, on average, were getting shared more than CNN’s!. What?!

After months of failing to get noticed online, messages started pouring in.

…and also that their followers LOVED the content they were sharing.

Pin
And I started getting posts and messages like that on a daily basis:

Pin
The messages just wouldn’t stop pouring in (and I loved it!):

Fact is, they were staying top of mind and getting REAL results! 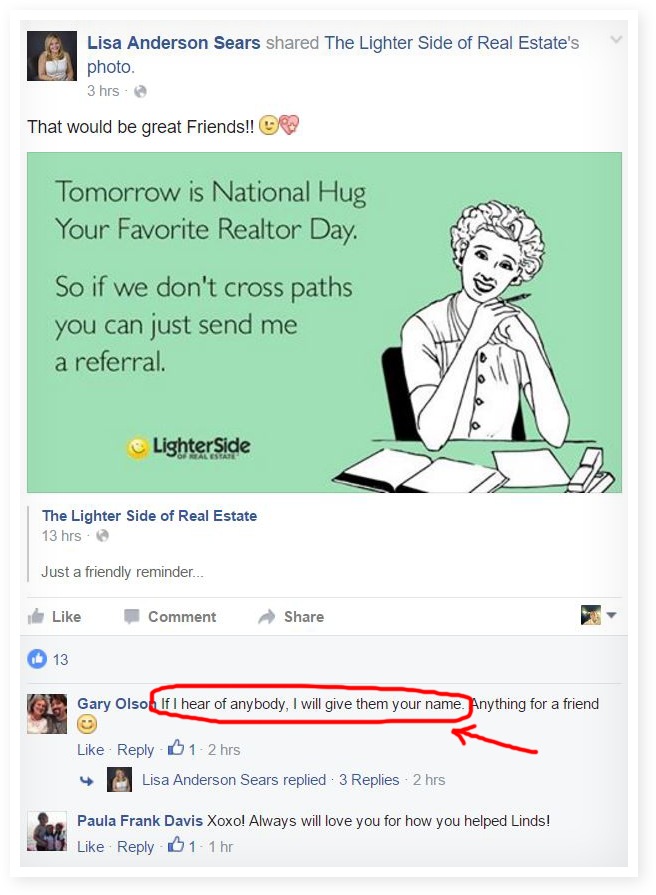 Pin
As it turned out, this kind of content was making THEM (the agents) look like rock stars. This feedback blew me away!

Agents flooded my inbox, asking permission to use my stuff with their own branding on it.

So I reached out to my email list and asked if I should create some sort of “content club”.

And boy did I learn a lot from that email! I uncovered a HUGE need.

Now here’s where YOU enter this story…

See, although the Lighter Side of Real Estate started out as a way to give real estate the makeover I mentioned earlier…

… it’s grown into a content marketing platform that agents like you can use to build your personal brand.

Wouldn’t it be freakin’ awesome if people were pre-sold on YOU as their agent?

If people loved the crap out of you even prior to reaching out to you?

If they respected you not only as someone who’s professional… but who’s also fun, relatable, and personable?

Of course that’d be freakin’ awesome!

And that’s exactly why I started the Lighter Side “Inner Circle”.