Home News Did You See This Viral Video? FYI, A Realtor Did NOT Set...

Maybe you’ve seen this story floating around the Internet, or maybe not. Maybe you instantly recognized it as a parody. Then again, maybe not. 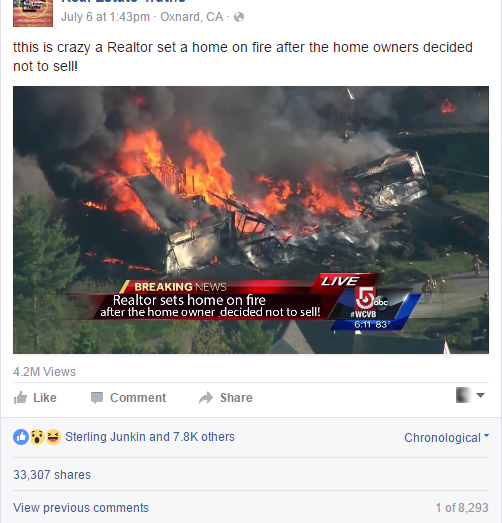 So what’s it all about?

Earlier this week a video was posted on Facebook depicting a house on fire. The fire was real, but the caption was not.

Realtor sets home on fire after the homeowner decided not to sell!

In truth, a Realtor did not set the house ablaze. The caption was photoshopped over legitimate news footage covering an incident where a New Hampshire police officer was fatally shot while responding to a domestic dispute call at a home that subsequently exploded.

The video went viral on Facebook, fetching 4.2 million views, 33,307 shares, and 8,293 comments before it was removed. One can assume that it became so viral because many people in the general public believed it to be true.

We can only assume this was an innocent attempt at humor by the creator(s) of this video. However, the result is that in the eyes of many, it casts a negative light on Realtors and the real estate industry as a whole.

The unfortunate truth is that real estate professionals already have to defend against common misperceptions people have about them, and this video doesn’t help their case.

By and large, agents are hard-working, loyal professionals who strive to do right by their clients day in and day out. We encourage you to learn more about agents and the real estate profession by clicking the links below:

Planning To Buy a Home This Summer? Here’s What You Need To Know

More Than Half of Homes Are Selling for Above Asking Price

Most Pandemic Buyers Happy With Their Home Purchase and the Process

15 Glorious Head-Scratchers From The Wild And Crazy World Of Real...

Real Estate Agent Was Not Expecting To Be Robbed By Hairdresser

12 New Ways To Use Old Shutters That Will Open Your...