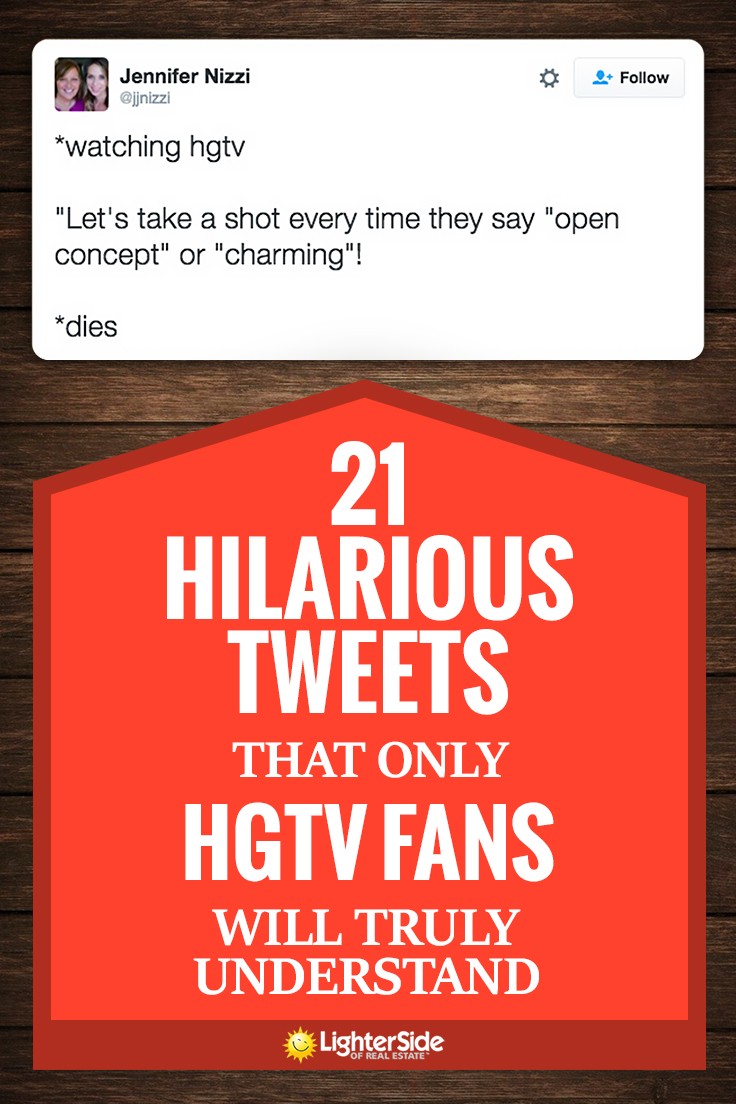 Television is a fun break from reality. Coming home, kicking your shoes off and flipping on the boob tube is a great way to get away from your horrible job, family, life… unless you love the reality TV. Then, sadly, you’re bringing that world home… especially when the shows are about homes! As benign as HGTV might seem, some of these fans are taking their love, and hatred, from a 2 to a 10 and Tweeting for the whole world to see.

That moment House Hunters makes you realize that apparently everyone else in the world, except you, has their lives together…

Professional skills include Microsoft Office, 90 WPM typing, and occasionally being able to guess which house they'll pick on House Hunters

Ahh… so that’s why dad always brings her a beer when House Hunters is on.

The 6th ring of hell is just people on House Hunters telling you they're not buying the house because don't like the color of the paint.

Your budget is almost $1million… but paint is what’s holding you back. Mmmk.

I go to the gym mainly to watch HGTV

Every episode of flip or flop:
Tarek: "WE'RE ALREADY SO OVER BUDGET THIS COULD FALL THROUGH THIS IS GONNA BE TIGHT"
*makes $60,000 profit*

Curious how much money Tarek has when he says at dinner, “Hey, could you get this? Money’s a bit tight this month…”

(my parents watching Property Brothers)
Dad: I swear to God they're gay
Mom: Dan how many times do I have to tell you? They're just Canadian

When I die, I don't care what I come back as as long as it's not the Property Brothers' other brother.

JD is the Khloe Kardashian of the Property Brothers.

THIS is when you know you are too invested…

”But they said this line was guaranteed to drive the ladies wild.”

Marriage is basically just eating together and watching HGTV until you die.

Funny how marriages before HGTV survived on actually doing the stuff you’re watching.

Mom: "I'm thinking of taking down that wall."
Me: "Is it load bearing?"
*mom stares at me in shock* #hgtvproblems

18% of my life is judging couples on HGTV.

Wow, judgemental much?? It only consumes like 10% of my life…

No more home improvement shows for me. I keep getting emotional at the reveals #hgtvproblems

I feel like HGTV is creating some false expectations for the attractiveness of the contractor you hire for home renovations.

Oh your contractor will have a six pack alright… in the cooler in his truck.

I know, right? It’s like an emotional roller coaster that you can’t get off.

When you realize House Hunters should be called Divorce Causer.

"I'm excited to hate these people and all their choices." –me, watching House Hunters Renovations

When you start wanting to renovate their faces, it’s time to take a break.

House Hunters:
“We’re looking for a spacious 9 bedroom beachfront home made of iPhones where Bjork will raise our kids. Our budget is $800.”

9 Things Homeowners are Looking Forward to in 2021

9 Unexpected Thoughts That Go Through Your Head After Submitting an...

© Copyright 2020 - Lighter Side of Real Estate
Do NOT follow this link or you will be banned from the site!
6.3kshares