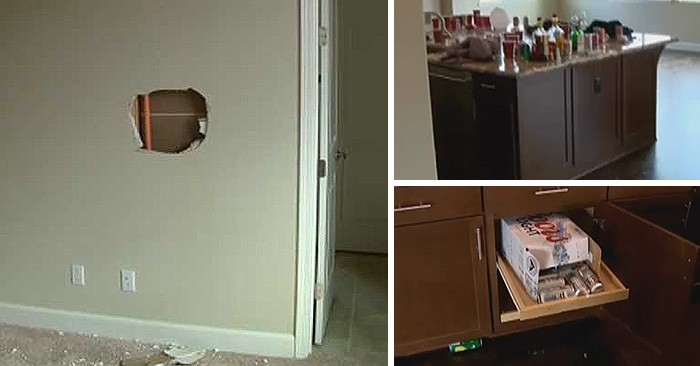 So you think you’re having a bad day? You may be, but we doubt you’re having a “200 wild kids trashing your brand new, not even lived in yet, ‘oh look they punched a hole in the wall to use for a football target’” day. That’s exactly what happened to one unfortunate California family.

Like a scene out of a 1980’s ‘Brat Pack’ movie, this beautiful El Dorado Hills home was infested with the worst kind of vermin known to man: Drunken teenagers. The home, which was under contract and set to close, was invaded by the sneaky hooligans just before the family performed the final walk-through the day before closing.

“Two girls stopped by and told us they had just closed on a house two doors down and said they were going to have a small party. They would try and keep it quiet and would we please not call the police,” a neighbor reported. Helpful new neighbor tip #1: If two teen girls stop by your home and say something to the effect of, “O-M-G we are, like, totes moving in next door and like… going to have a rager, I mean, quiet party so like… O-M-G, could you totes not call the cops on us or anything?”, YOU CALL THE POLICE.

The quiet little soiree the girls described to the easily-tricked neighbors, quickly turned into a raging kegger with hundreds of little destructive terrors letting loose all kinds of mayhem and carnage on the innocent family’s new home.

“None of the people who were at the party had permission to be at the residence. It was basically a brand new house that had just been sold. The first deputy who arrived on scene said there were 200 plus young adults there who obviously, when they saw the sheriff’s vehicle pulling up, they ran!”, said Lt. Jim Byers of the El Dorado Sheriff’s Department.

Neighbor Alicia Haber says she knew something wasn’t right with all the noise outside. “It was about 10:30 at night and when we heard all the cars revving up, and that’s too much,” Haber said. That Fast and the Furious reenactment was what clued her in that there was a problem.

The deputies showed up so quickly and unexpectedly that one of the partygoers actually left her purse behind. Along with the purse and other evidence, the officers were able to apprehend multiple suspects. The department is still struggling to figure out how the teens actually gained access to the home.

As for the walk-through, we’re hoping the Realtor is savvy enough to figure out how to turn those negatives (plethora of red Solo cups, empty beer bottles, kid still passed out on the stairs) into positives. Good luck (and our deepest condolences)!

Using 5,500 Pennies And Some Creativity, He Turned The Inside Of...

© Copyright 2020 - Lighter Side of Real Estate
Do NOT follow this link or you will be banned from the site!
1.4Kshares
1.4Kshares